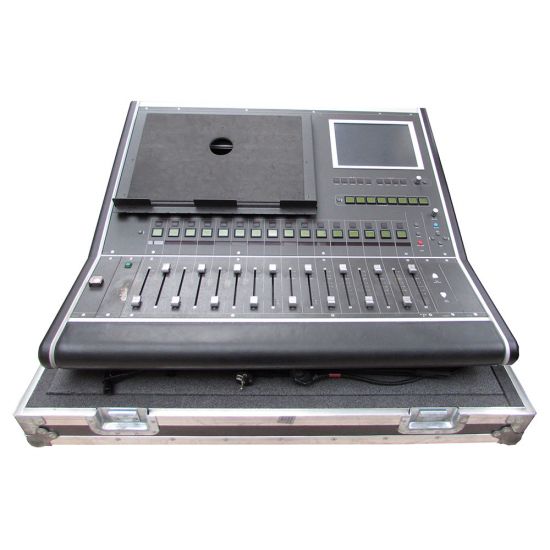 The D5-TC (Theatre Masters Controller) provides alternative control over the 24 control group masters, outputs and cues, as well as all the normal display modes from the D5T master section on a TFT touchscreen. A row of 16 widely-spaced master faders with scroll function buttons display either the first 16 or the last eight control groups and include a bright, eight-character alphanumeric display above each fader showing master channel names independently of the LCD buttons.

Eight programmable, interactive LCD macro buttons (and access button) allow access to pre-defined user macros in three banks of eight, and there are four Mute-all buttons (inputs, auxes, subs and groups) and five Safe-all buttons (inputs, subs, groups, MIDI and events). Previous/Next Cue buttons beside the faders can be relocated to the left or right hand side of the console. Footswitch sockets on the rear panel allow remote firing of “Next”.

Other features include a built-in permanent script tray to ensure that the controls are not obscured, while the tray conceals a lit internal QWERTY keyboard. The D5 Live’s meterbridge is absent on the D5T, allowing a clear view of the stage. Pre-defined macros allow full size metering to be displayed on the overview screen, Master fader motors are disabled by default to suit theatre operation.

Customisability includes spare modules on the left and right hand sides with a tunnel to the back panel, allowing individually-specified buttons and wiring loom to be installed. Tapped holes on the rear panel allow mounting of a bar to secure peripherals such as small LCD monitors, cuelights and the like.

Facilities are completed by two Littlites and a USB socket in the keyboard compartment for your storage device and possible future additions.